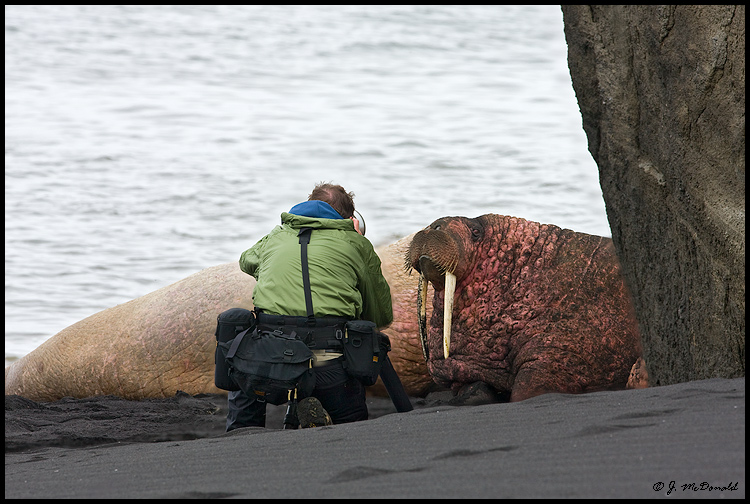 Greetings and thank you for checking out www.EJPhoto.com.   My name is E.J. Peiker and the photos you can find on this site are the culmination of nearly 50 years of photography, the vast majority coming since 2001 when I started my photography business.  I am a professional freelance Nature Photographer, born in 1960 in Augsburg, Germany in the German state of Bavaria near the Alps.  My family moved to Mansfield, Ohio, in 1969 right before my 9th birthday.  I became a citizen of the United States of America in 1975 and lived in Ohio until 1979 when I began attending Purdue University in West Lafayette, Indiana.  My original goal was to attend the United States Air Force Academy in Colorado Springs but after my distance vision deteriorated late in high school I was unable to fulfill my dream of becoming an Air Force Pilot.   Plan B was set in motion when I inherited my grandfathers electronics workbench several years earlier.  I tinkered with motors and other electrical devices for hours on end in my teenage years.  At Purdue, I earned a Bachelors Degree in Electrical Engineering and also completed graduate studies in Microelectronics and Semiconductor Physics.  For nearly 27 years, I worked for the Intel Corporation in California, New Mexico, Oregon, and Arizona where I engaged in the production of the microprocessors, chip-sets, and communication chips that power Personal Computers, Workstations, File Servers, Super Computers, and the Internet.  Since 1994, I have lived in the south-central Arizona city of Chandler, a large suburb southeast of Phoenix in the Sonoran Desert.  I have two adult sons, Nicholas and Gregory.   I have formally studied photography at the University of New Mexico, taken seminars from The Rocky Mountain School of Photography, and participated in photography seminars and workshops led by several renowned photographers including John Shaw, Art Wolfe, Arthur Morris and others. 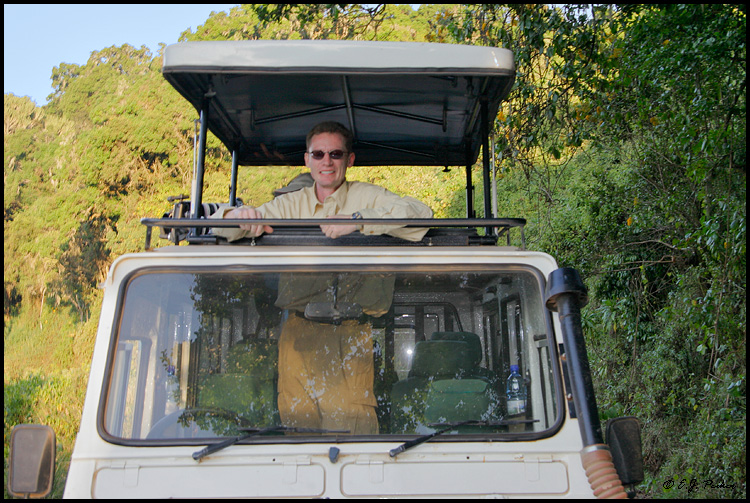 In search of Cheetah In a Range Rover Safari Vehicle, Ngorongoro Crater, Tanzania

I received my first camera at age 7 - a now defunct 126 square-format Kodak Instamatic.  At age 12, I started to take pictures more seriously using a Yashica 35mm rangefinder with a 45mm f1.7 lens.  At age 16 I switched to Minolta cameras starting with the professional level XD-11 SLR and then progressing through the Minolta system ultimately ending up, in the late 1980's with the Minolta Maxxum 9000, the first pro-featured auto-focus SLR.  In 1990, I suffered a serious skiing injury that was diagnosed as one that would likely prevent me from walking un-aided again due to the extensiveness of the damage to my left femur, thigh muscles, nerves, hip, and knee.  When I was told that I might not walk again, I decided to sell all of my Minolta equipment while it still had value.  Determination, resolve and many months of  physical therapy resulted in a full recovery 3 1/2 years later after several surgeries.  During my recovery years, I got my drive and determination from aviation earning Private Pilot, Instrument Pilot, Multi-engine Pilot and Commercial Pilot certificates.  I also became heavily involved in advanced flight simulation as pilot training aids and started writing articles about them for aviation magazines.  This gave me the opportunity to log time in American Airline's full motion flight simulators where I learned to fly a Boeing 727 jet airliner.  I have owned both single engine and multi-engine airplanes in the past but do not own an aircraft at present. 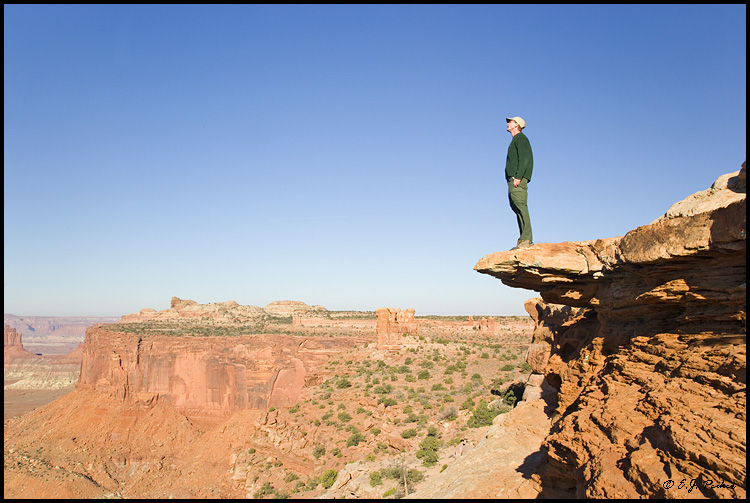 Overlooking the valley 3000 feet below in Canyonlands National Park, Utah

After my recovery I purchased an Olympus IS-1 Zoom Lens Reflex camera which I quickly found to be way too limiting so I started over in 1994 using the Nikon system.  I eventually ended up with Nikon Professional bodies and Nikon's professional grade AF-S lenses.  The choice of Nikon was heavily influenced by John Shaw's photography and writing.  I concentrated primarily on Southwestern landscapes and captive species animal photography.  In 1999, my photographic world expanded when I was introduced to the pioneering bird photography of Arthur Morris through a book called "The Art of Bird Photography" which he authored.  As I got more heavily into bird photography it became apparent that Canon's Image Stabilization technology would result in a much higher percentage of sharp photos with the very long focal length lenses needed to get full frame bird photographs.    In December 2000, I began photographing with Canon's professional EOS 1 series of camera bodies and Canon "L - series" professional lenses.  In early 2002, I added the EOS 1D professional digital body and in 2003 I added the full-frame EOS 1Ds digital body.  In mid 2003, I sold my last film camera body since high end digital cameras were beginning to equal the best 35mm film cameras in image quality.  For several years, my primary landscape tool was the 16.7 megapixel EOS 1Ds Mark II and my primary wildlife camera was the EOS 1D Mark IIn camera.   In mid 2008, I added a Nikon D300, D700 and the Nikon 200-400 f/4VR lens due to the fact that the Canon simply offered no long zoom that rivaled this lens and Nikon lenses now offered stabilization as well.  At the beginning of 2009 I liquidated my Canon gear and fully switched back to Nikon after several Canon miss-steps on significant new gear introductions and a product line that was increasingly less to my liking.  In late 2013 I began transitioning my landscape and travel photography to the Sony a7R and a7R II mirrorless cameras along with Sony, Zeiss and adapted Nikon optics.  This has been a dramatic weight savings while giving up nothing in image quality to 35mm DSLRs.  In 2014 I started dabbling in high megapixel medium format imaging and got more and more into it culminating in my adopting the Phase One 100 megapixel system in 2016 and then shifting gears in 2018 to a lighter medium format system, the Fujifilm GFX.  For details on the tools that I currently use, please click on Equipment in the main menu above or follow the hyperlink. 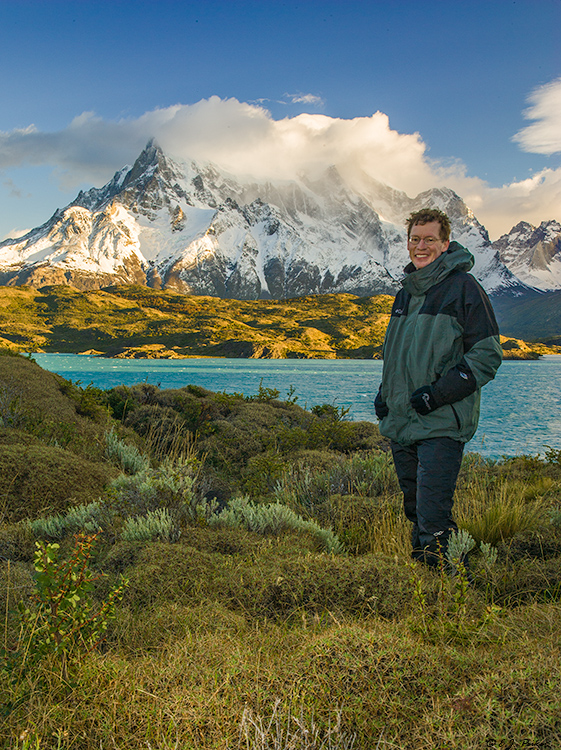 Artistic images of ducks is one of my photographic specialties and I teach others Duck and bird photography through my DuckShopTM photographic workshop series as well as other wildlife and landscape workshops around the world.  I have also expanded my love for landscape photography and am heavily engaged in creating artistic landscape images of North America's and the world's great scenic wonders.   I have graduated from captive wildlife species to those that roam in the wild and do not photograph captive animals anymore.  I have been fortunate enough to photograph all 7 of our planet's continents. 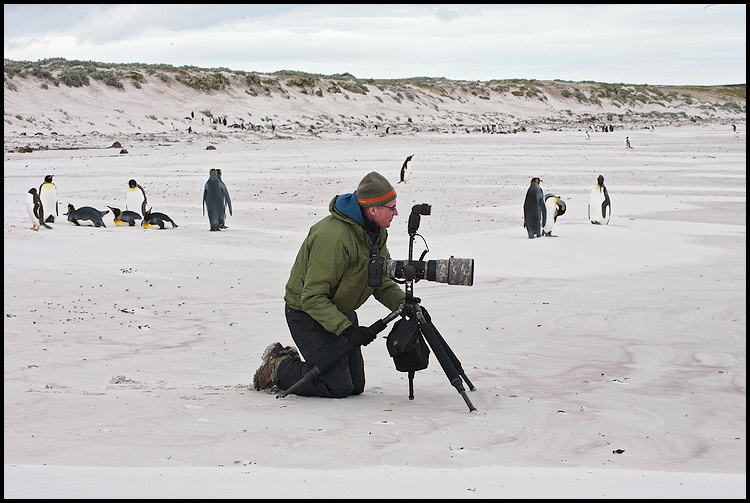 Photographing King Penguins in the Falkland Islands
My photographs have been published in many nature, agriculture and photography magazines and books including Outdoor Photographer, Popular Photography, Backpacker Magazine, Birding Magazine, Audubon Society publications, National Geographic books, Barron's, the World and National Wildlife Federation, the UK's Practical Photography and numerous other publications.  I was honored to have 170 photographs included in the The American Museum of Natural History Birds Of North America Book and 16 of my photos in The Smithsonian Institution's Natural History Book.  The US National Park Service uses some of my images in their National Park Brochures as does the Fish and Wildlife Service, National Wildlife Federation and more.  Several zoos from around the world (North America, Australia, Asia, Europe) use my photographs for their identification displays.  In 2014 I was honored to have one of my images selected to be part of a special postage stamp set designed to commemorate and educate about Antarctic Wildlife by New Zealand Post.  Additional usage of my photos include murals, pictures on the walls of restaurants and hotels, some into T-shirts, and some adorn the labels of fine products like wines. One has even been used by the US Navy to christen one of it's submarines.  My photos are also in widespread use in educational material for children in both Canada and the US.  I was a Field Editor, Forum Moderator, and contributing author for the WEB based Nature Photography magazine NaturePhotographers.net until 2003 and am now Sr. Technical Editor and co-founder of the worlds premier Nature Photography web site NatureScapes.net.  I have had a private exhibition of 30 of my photographs in Israel and teach Introduction to Bird Photography courses and Outdoor Flash Photography in various venues.  I am a workshop leader and photography teacher for NatureScapes Certified Workshops.  My eBooks "Ducks of North America - The Photographer's Guide" and "West - A Collection Of Photographs From The Western United States Of America" were published in 2011. 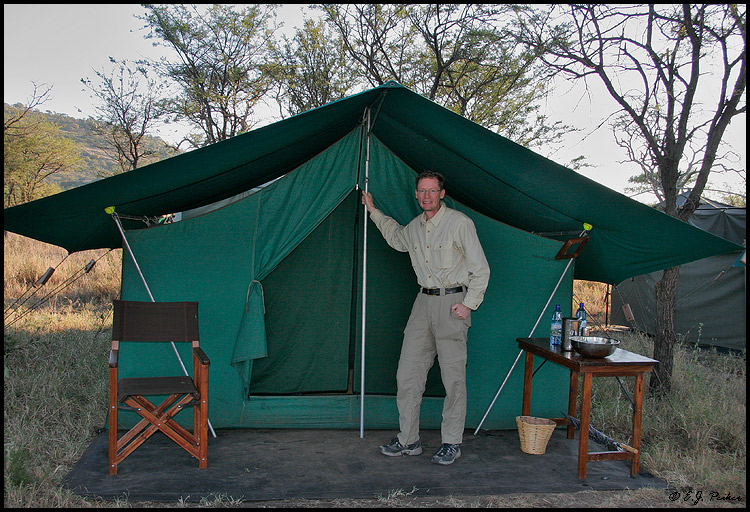 Accommodations in the Serengeti 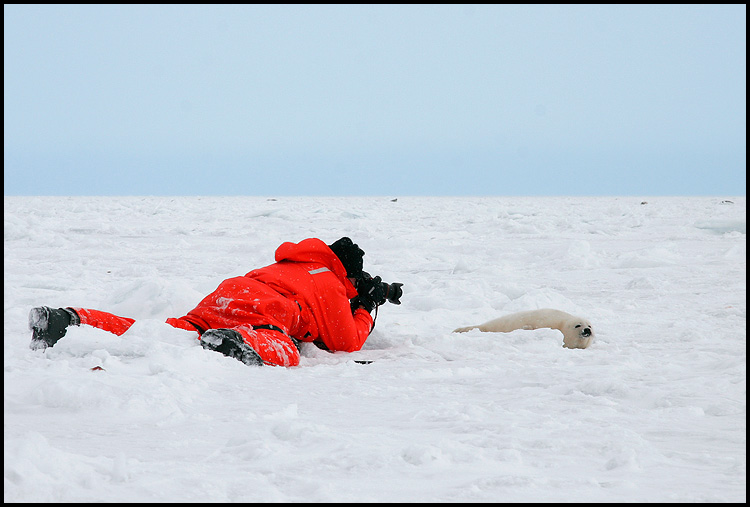 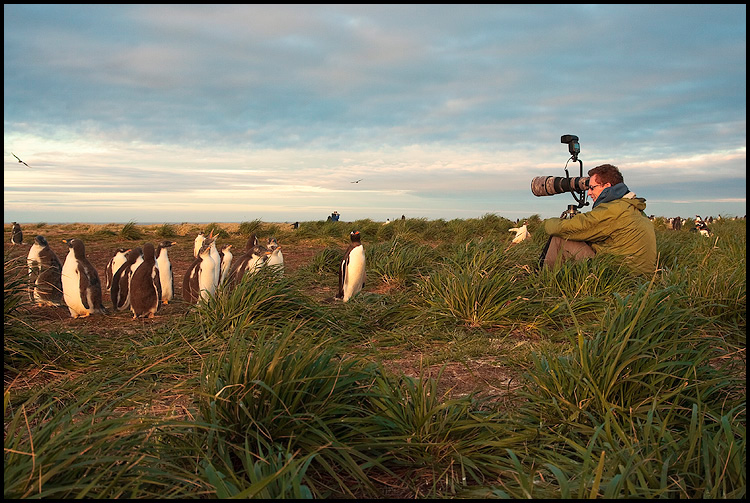 Gentoo Penguins in the Falkland Islands 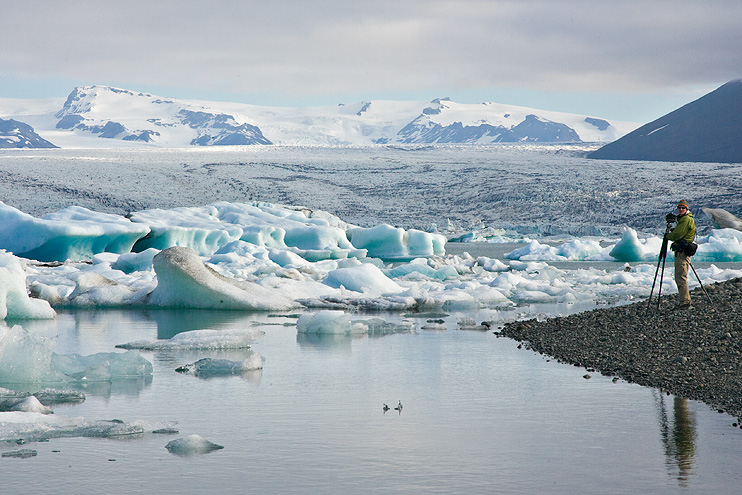 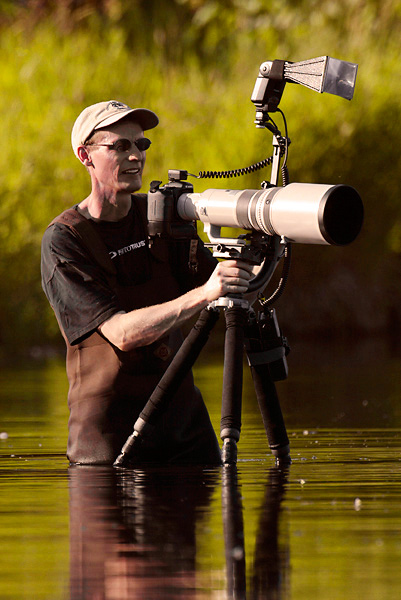 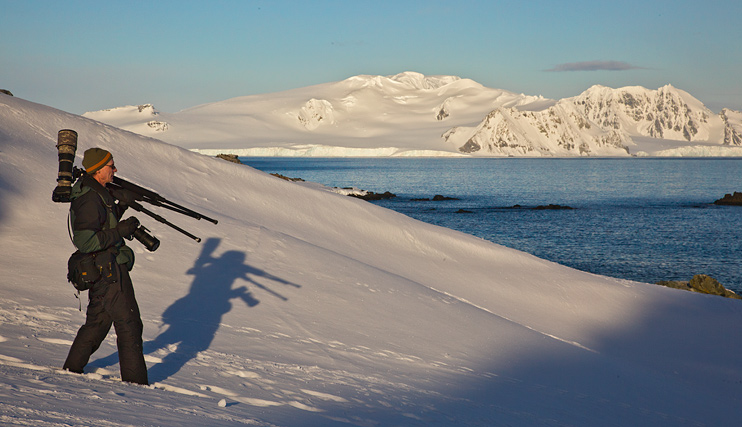 Looking for Chinstrap and Macaroni Penguins in Antarctica 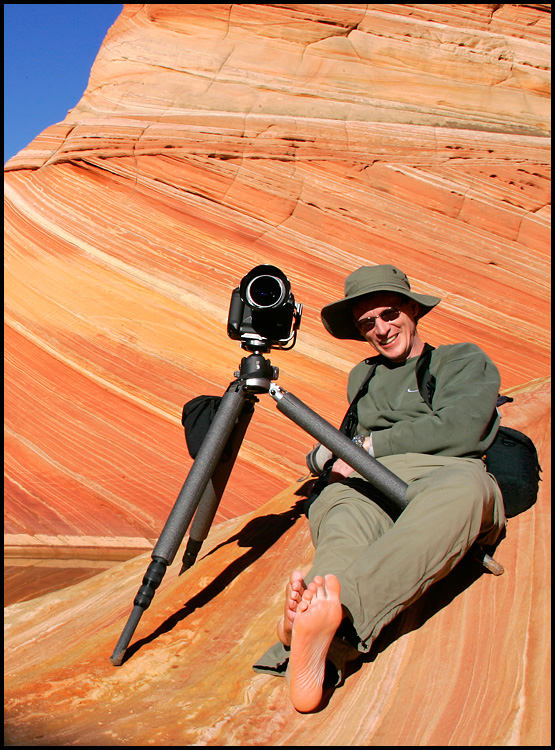 Taking a Break at The Wave, Paria Canyon, Arizona 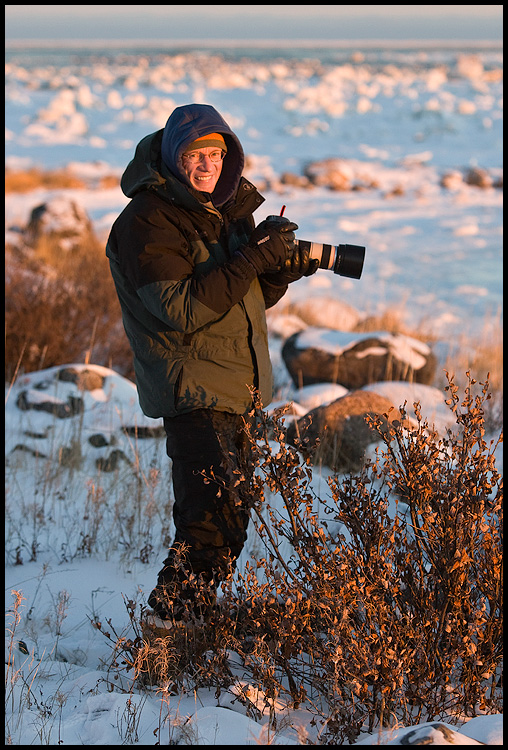 A balmy 25 below in the Arctic, Hudson Bay 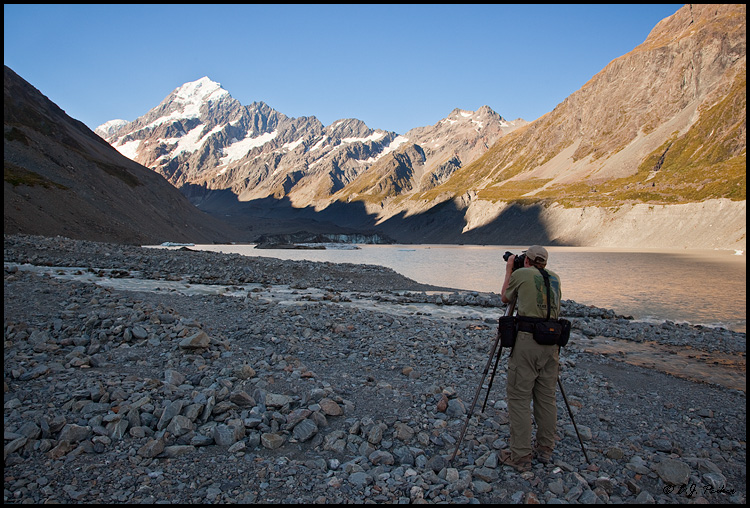 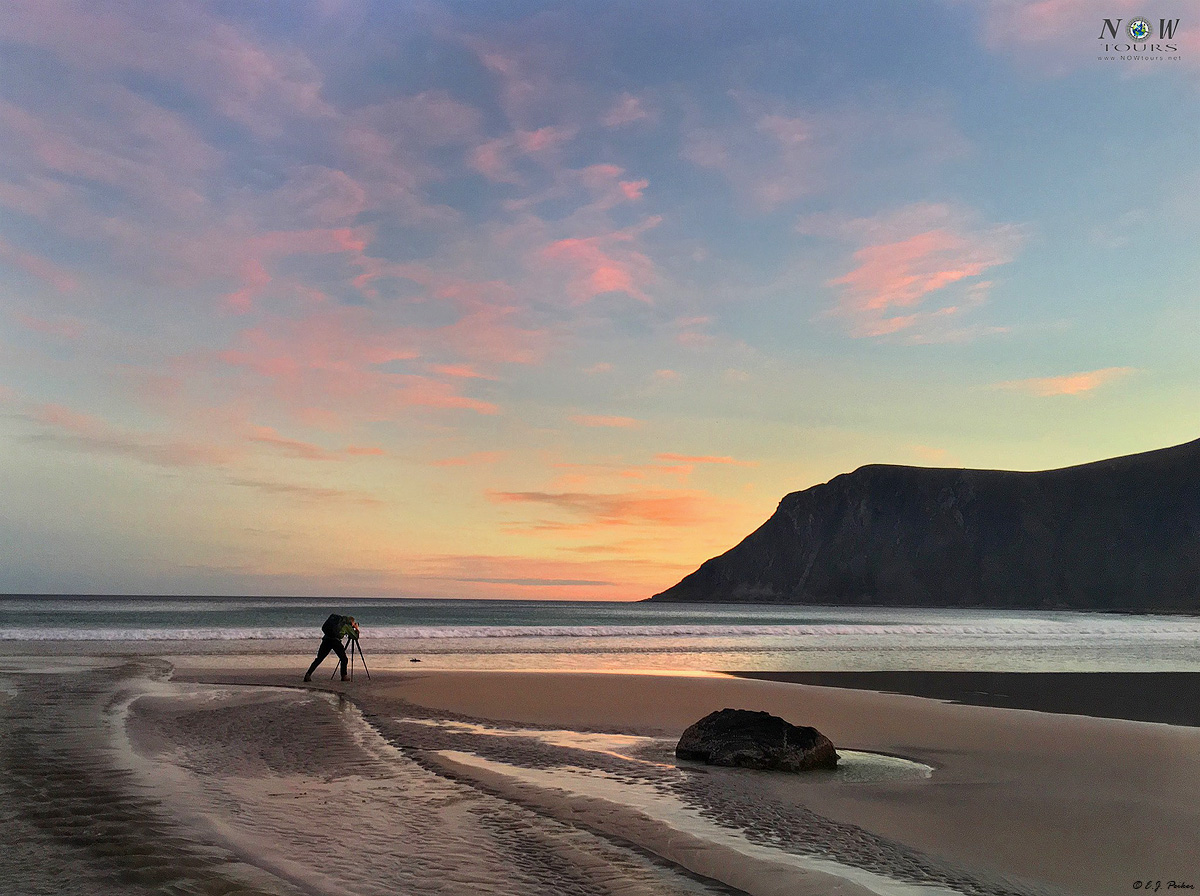